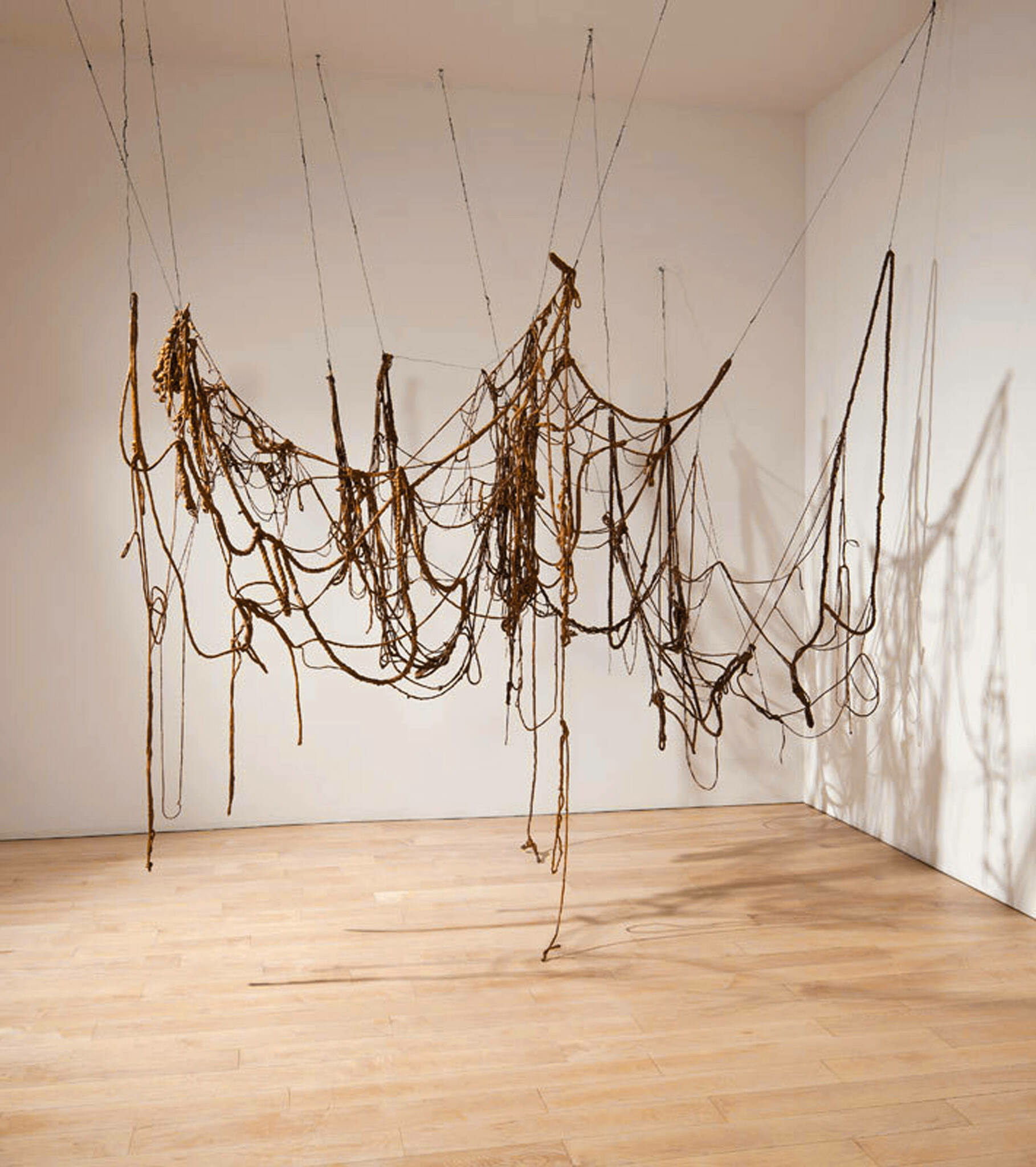 Like much of Eva Hesse’s work, No Title substitutes fragile substances and irregular, organic forms for the rigid geometries and industrial materials of Minimalism, one of the dominant modes of art-making in the mid-1960s. The sculpture is one of Hesse’s last works before her untimely death at the age of thirty-four. To create it, Hesse dipped two separate pieces of knotted rope into liquid latex. The rope then hardened, providing an underlying weblike structure for the sculpture’s gracefully arching loops and dense, twisted segments. It attaches to the ceiling and walls in thirteen points, but these placements are flexible to allow for variable installations. This mutability was in keeping with Hesse’s intention for the work. A drawing she made while conceptualizing the piece was accompanied by a note which read, "hung irregularly tying knots as connections really letting it go as it will. Allowing it to determine more of the way it completes its self."

No title is a tangled, web-like sculpture suspended from thirteen variable points on the walls and ceiling around it. While its precise dimensions are flexible, depending on the particular installation, the work is consistently monumental in scale, extending vertically from floor to ceiling, with roughly the footprint of a pickup truck.

The web is simultaneously graceful and chaotic, with lyrical swooping arcs and frenetic, dense snarls throughout the composition. It is made up of two lengths of rope that have been coated in latex. The latex is a warm ocher in some places, and a deeper brown shade where the material has dried more thickly onto the rope’s surface. In these spots, the rubber completely obscures the rope beneath it, but in places where the coating is thinner, the coiled shape of the rope is visible underneath. Although the latex coating appears smooth and flexible, it is actually quite brittle, and will continue to grow increasingly fragile as it ages.

The elements of No title have been described in organic terms—like branches and swathes of moss hanging low in a marsh. It stands in opposition to the hard geometric forms, industrial materials, and intentional perceptual clarity of Minimalism, which was the dominant artistic movement in New York City when Eva Hesse made the work in 1970. Hesse began No title by making drawings, which is reflected in the line-like quality and variable weight of the ropes as they hang  in the space of the gallery. Although this work is sculptural, it may also be understood as a drawing in three dimensions, with the density of interwoven skeins analogous to lines built up darkly on the page.

Hesse made No title with the help of a studio assistant, as she was battling brain cancer and was limited in her mobility. But beyond the physical support she received, the materials she used also did a great deal of work. The liquid latex, as it was drying, would have dripped down the length of the ropes, lending a sense of heaviness and movement to the finished web. In a preparatory drawing for No title, Hesse noted that the work “completes itself.”