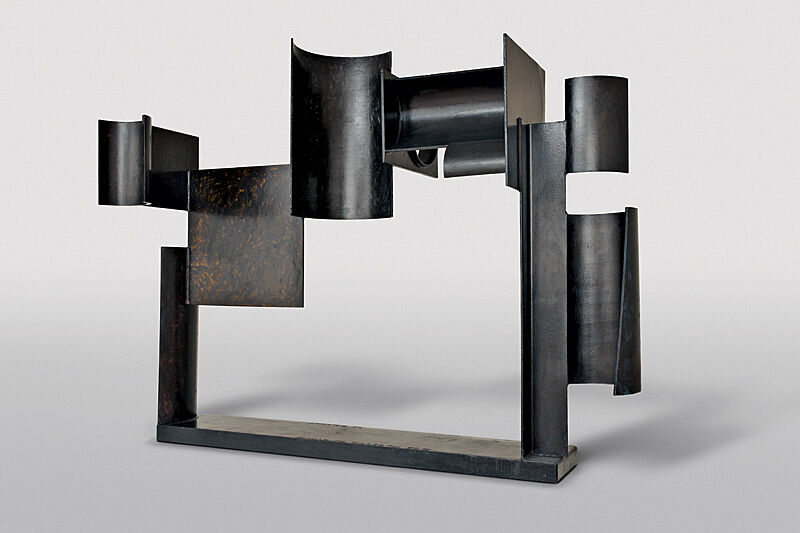 Narrator: Take a moment to move around this sculpture, Zig III. Peter Stevens.

Peter Stevens: It's interesting that Smith, who avidly photographed his work and photographed collaged views of his sculpture, photographed this sculpture more than any other work that he had made. It is one of the most complex sculptures in terms of its multiple views.

It's a form that radically changes from what appears to be the side. We have an absolute signature totemic Smith image, almost like a cross with a vertical and a horizontal. It's very closed, very dense, and weighted, and in a sense, relates to the kind of imagery that we get in some of the Cubis. As we walk around to what seems to be, again, more the front or the side, we get this opened‑up transparency of looking through the sculpture into the world.

When Smith made Zig III, he painted the sculpture the three primary colors: red, yellow, and blue. We can still see the remnants of those colors underneath the unifying surface of the kind of scumbled, black oil paint that he put over these three primary colors. So he's unified the entire sculpture with this black surface. At the same time as giving us, if we really look into the sculpture, this sense of this earlier form that it had: referencing Mondrian, referencing the kind of pure geometric abstraction's interest in these primary colors.

So he's creating, in a sense, a subtle double approach to this sculpture.

Narrator: As modern as this work is, Smith yet again brought in elements of the ancient past. The series title “Zig” playfully abbreviates “ziggurat,” the name of the ancient Mesopotamian step pyramids.