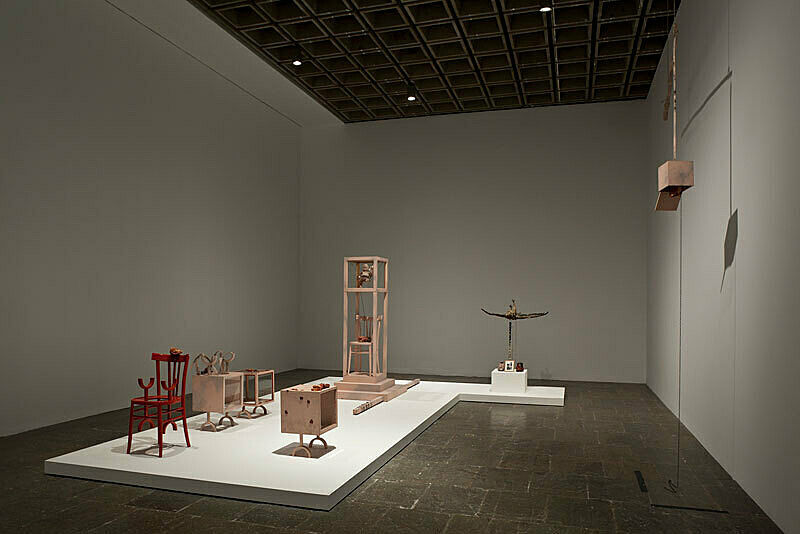 Narrator:  Thek loved the rituals and processions of the Catholic Church. He wrote to a friend:

Paul Thek [Ed Burns]: I want to do a crazy show, a procession, and do all the things that people carry and wear in a procession, like jewelry and masks and shrines etc. and it could be a joy to do.

Narrator: The result was the group of objects displayed in this gallery, called A Procession in Honor of Aesthetic Progress: Objects to Theoretically Wear; Carry; Pull or Wave.

Thek designed two types of simple sculptures, which you see here: chairs to be worn on the shoulders; and glass boxes to cover the head. The procession’s culminating object was the Sedan Chair, also on display, which was to be carried like a litter. Colors were chosen based on their associative meaning: red represented hell; pink, the here and now; and white referred to heaven.

The pieces evolved from Thek’s earlier work: instead of boxes displaying body casts, he designed boxes to cover the live body. In reality, the chairs and headboxes were too fragile to be worn, but Thek began to incorporate the idea of performance into his art in different ways. You can see a series of photos in this area in which Thek enacts a kind of private performance in the installation, flying a bird through the gallery.

Thek rarely handled logistics, so his dealer was both surprised and concerned when he personally arranged to ship these works from his studio in Rome to the gallery in Essen, Germany. Unfortunately, the results were disastrous. Several objects were detained in customs and only released when Thek’s dealer convinced officials that the meat would spoil if it remained in storage. Other pieces arrived in Thek’s luggage, a mess of broken glass and wood. Faced with the ruin of his work just days before the opening, Thek retreated to his room and slept.

Eventually, he devised a plan. Thek transformed half of the gallery into a messy, paint-spattered studio. Here he cordoned off the broken sculptures and recreated them over the next several weeks. He placed each finished object on a pedestal on the other side of the gallery, in an installation like the one you see here. Each day visitors to the gallery saw an installation that was a little different than it had been the day before. He subtitled the exhibition A Work in Progress and told critics that this had been his concept from the beginning. This new emphasis on process became integral to Thek’s work, and he completed most of his subsequent installations in the same way.