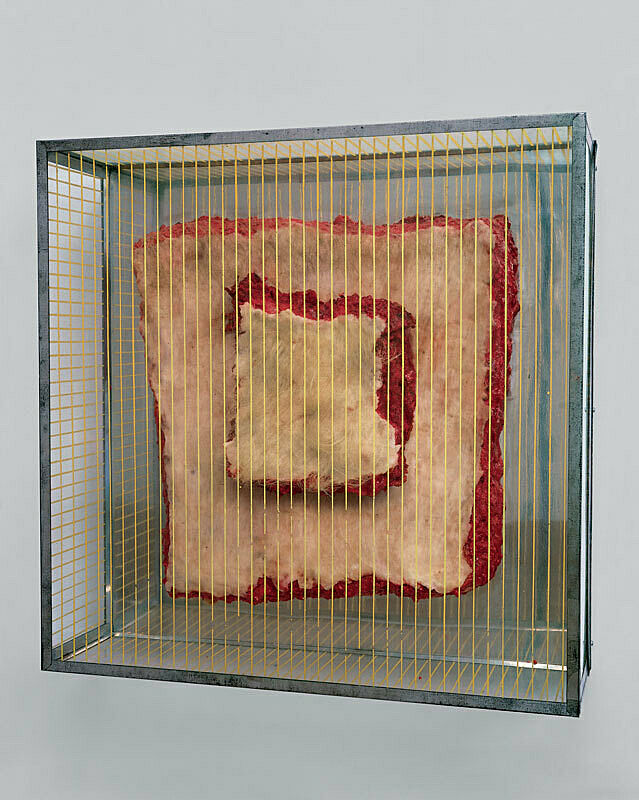 Narrator: This simple glass and metal case, precisely scored with yellow lines, recalls minimalist sculpture. Minimalism was a style that emerged in the 1960s, and its practitioners tried to distill form, shape, color, and line to their purest expression. As exhibition co-curator Lynn Zelevansky explains, Thek rejected the idea that art could be solely about form.

Lynn Zelevansky: He was interested in art that went beyond art, that wasn't just art but that made references to life in various different ways and to experience in different ways. I think that's a really interesting thing that Thek would have seen Minimalism, in a certain sense, and the insistence on a kind of formalism, as a denial of death. You know, as a sort of bloodless denial of death. And so this was his answer to it.

Narrator: Thek himself explained in an interview:

Paul Thek [Ed Burns]: I was amused at the idea of meat under Plexiglas because I thought it made fun of the scene. . . . Nobody ever mentioned anything that seemed real. The world was falling apart, anyone could see it.

Narrator: Indeed for many critics, Thek was one of the few artists to acknowledge and express the violence of his time the 1960s an era marked by political assassinations, the Vietnam War, and the struggle for Civil Rights.