"Looking at Mars, this imagined space reflects most humans back to Earth."

Since relocating to California's Mojave desert in 2013, artist MPA (b. 1980; Redding, CA) has been immersed in a broad inquiry into the potential colonization of Mars, often known as the red planet. In this multi-part exhibition the artist looks at Mars as a place for settlement and a resource for our own planet, as well as a site of possible human origin. MPA’s research considers unconventional sources such as mythology, psychic accounts, and personal narratives, as credible authorities. By reflecting more generally on histories of colonization, RED IN VIEW raises questions of militarism and patriarchy, prompting us to examine our own, often subconscious, colonizing behaviors.

RED IN VIEW unfolds in four movements throughout the Museum. The exhibition begins in the lobby gallery and extends to the theater in February for a culminating performance. Over the course of ten continuous days, MPA and artists Amapola Prada and Elizabeth Marcus-Sonenberg perform Orbit, living in the narrow space between the windowpanes of the theater. The space becomes a biosphere: an enclosed, self-sustaining habitat, modeled after an environment where the first settlers on Mars might reside.

Aspects of the exhibition will be on view through February 27, 2017 in the John R. Eckel, Jr. Foundation Gallery, on the Museum's first floor, which is accessible to the public free-of-charge.

MPA (b. 1980) has explored a range of meditative, durational, theatrical, and actionist modes of performance to engage "the energetic" as a potential material in live work. Enriched with ritual, her performances and installations critically examine behaviors of power in personal and social spaces. In previous works, she has proposed questions on the global arms race, patriarchy as governance, and the dysfunctional union of art and capitalist commodity. MPA's work has been exhibited at the Swiss Institute, New York; Los Angeles Contemporary Exhibitions (LACE); the Stedelijk Museum Amsterdam, Netherlands; and Museo de Arte Contemporáneo de Oaxaca, Mexico. Her dynamic body of work Directing Light onto Fist of Father (2011) at Leo Koenig Projekte in New York, combined a looping 16 mm film and a plaster cast of MPA’s father's fist in an installation that incited three durational performances. In Trilogy (o) (2012), presented at Human Resources in Los Angeles, NASA sound recordings of dying stars accompanied thirty-one photographs of Nike war missiles arranged as a moon calendar. A frequent collaborator, MPA is a visible muse for many contemporary photographers, painters, and performers. After receiving a Foundation for Contemporary Arts Grant in 2013, MPA relocated from New York City to Twentynine Palms, CA to continue her research with somatic practices. Since 2013, MPA has focused these studies with research on the potential human colonization of Mars. This work was first presented as THE INTERVIEW: Red Red Future (2016) at the Contemporary Arts Museum Houston. RED IN VIEW, her exhibition at the Whitney Museum of American Art, presents the second episode in this ongoing project. 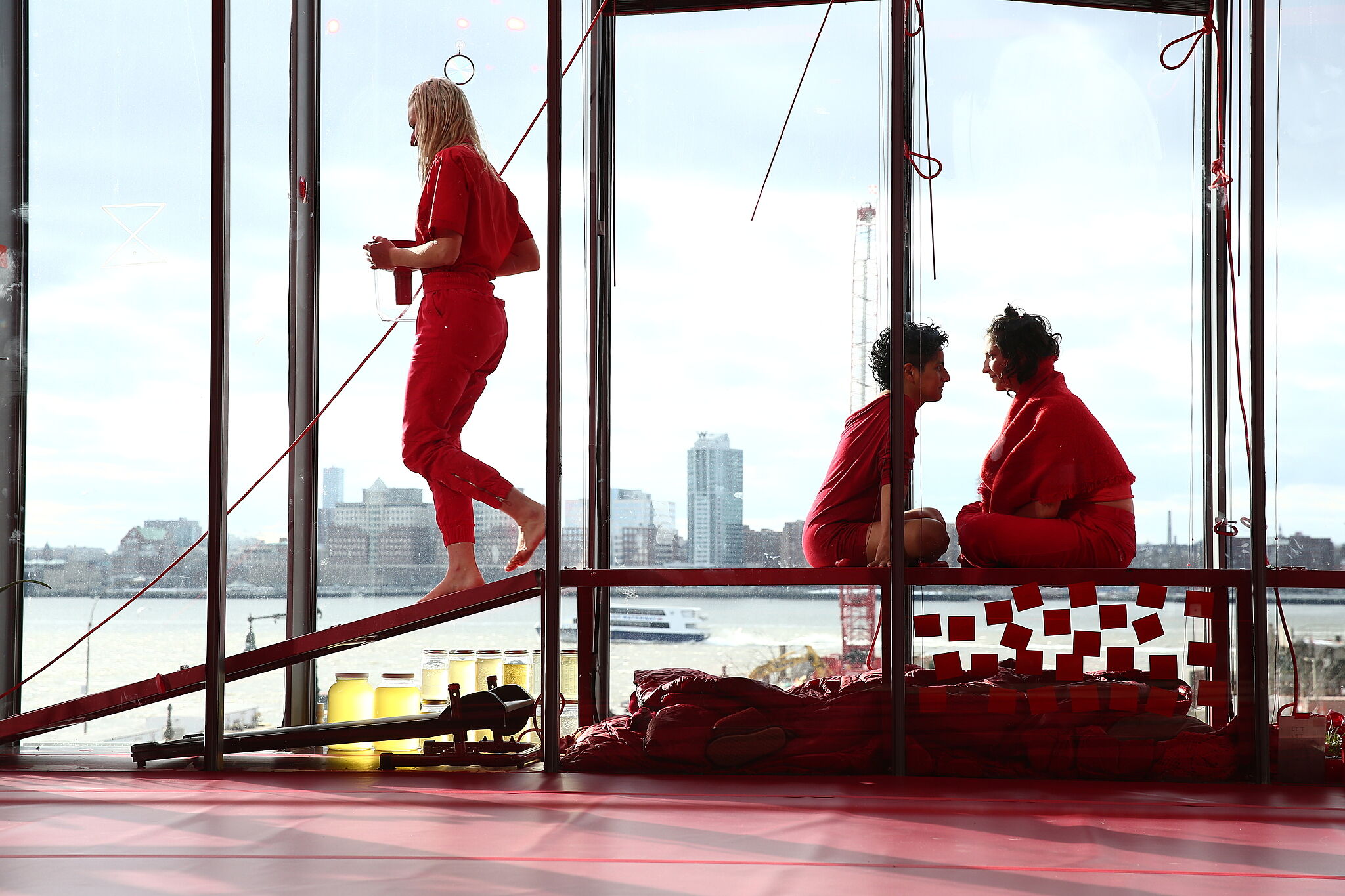 On February 9, 2017, artists MPA, Amapola Prada, and Elizabeth Marcus-Sonenberg entered Orbit, a continuous ten-day performance staged in the narrow space between the windowpanes of the Whitney’s Susan and John Hess Family Theater overlooking the Hudson River.

The enclosed environment—which included a composting toilet, plants, a ten-day supply of food and water, basic bedding, a treadmill, instruments, and a three-camera video-surveillance system—was inspired by the simulation projects conducted by universities and space agencies to test the viability of human life
on spacecrafts and on Mars. The participants’ conditions partially emulated those of astronauts orbiting Earth: they slept in scheduled rotations, received messages on a delay, exercised daily, and tracked their energy usage. They embarked on Orbit without rehearsal, with their own assignments, objectives, and visions of the future and survival.

Orbit was conceived by MPA as part of her Whitney exhibition RED IN VIEW, which considered how the potential colonization of Mars, the red planet, exists in the cultural imagination. As part of her ongoing research into the topic, she asked many people to draft written accounts of Orbit, ourselves included. We had a unique position in the project. Having organized the show with Jay Sanders, former Engell Speyer Family Curator and curator of performance, we were asked by MPA to serve as “Ground Control” for the entire trajectory. In a sense, this moniker cast us in a role we already perform at the Whitney in support of artists’ projects. We sat in the back of the theater with our red laptops every day during Museum hours, usually together, though on the weekends we took shifts. We were the tether between Orbit and our earthly institution, communicating with the artists daily. We chose to record in real time the actions that we observed, letting our two voices intermix as one, even while we sometimes wrote as “I” from singular perspectives. What follows is our data diary.

I. Prelude
November 11, December 9, and January 13, 7–9:30 pm, Lobby and Lobby Gallery
A periodic live appearance in the gallery by two Martian moons, Phobos and Deimos.

II. The Interview
November 11–February 27, Lobby Gallery
The interview is active. You are invited to pick up the phone.

III. Orbit
February 9–19, Floor Three, Hess Family Theater
Beginning on February 9, artists MPA, Amapola Prada, and Elizabeth Marcus-Sonenberg enter Orbit, a continuous ten-day performance staged in the narrow space between the windowpanes of the Whitney’s theater, overlooking the Hudson River. The enclosed environment—which includes a composting toilet, plants, a ten-day supply of food and water, basic bedding, a treadmill, instruments, and a three-camera video surveillance system—is inspired by the simulation projects conducted by universities and space agencies to test human life on spacecrafts and on Mars. The participants’ conditions partially emulate those of astronauts orbiting Earth: sleeping in scheduled rotations, receiving messages on a delay, exercising daily, and tracking their energy usage.

Significant support for the Whitney’s Performance Program is provided by the Andrew W. Mellon Foundation.

Generous support is also provided by the Performance Committee of the Whitney Museum of American Art.

Selected works on view were commissioned by the Contemporary Arts Museum Houston for the exhibition THE INTERVIEW: Red, Red Future, organized by Dean Daderko, curator.