Los Angeles-based artist Karthik Pandian uses 16mm film and architectural constructions to examine the relationship between ancient and modern cultures and the ways in which contemporary societies understand and treat the monuments of societies past. Unearth grows out of Pandian's two-year investigation into the ancient Native American city of Cahokia, the remnants of which are located outside and underneath the site of present day East St. Louis, IL.

Unearth consists of five monolithic pillars arranged in a line through the gallery. Three pillars are constructed of rammed earth with layers of other materials including shells, magenta twine used at archeological sites, and strips of 16mm film embedded like strata. Pandian's choice of rammed earth evokes the construction method used to make the large ceremonial mounds which dominated the site at Cahokia. The other two alternating pillars are encased in mirrorpane glass and support 16mm film projectors. For Pandian, mirrorpane glass recalls both the pristine surfaces of Midwestern modern architecture and the conventions of museum displays used to hold cultural artifacts. The two 16mm film loops concern architectural creation, destruction and preservation. Images of the Cahokia Mounds Interpretive Center and a convention for "ethnographic" art collectors are inter-cut with scenes from the aftermath of a ritual-like performance by the artist.

Karthik Pandian (b. 1981) lives and works in Los Angeles. He has had solo exhibitions at Richard Telles Fine Art, Los Angeles; Galerie Meyer Kainer, Vienna (with Mathias Poledna); Midway Contemporary Art, Minneapolis; and has shown in numerous group exhibitions. His films have been showcased at Bidoun Video 2009 in Dubai, UAE, Anthology Film Archives in New York, and the Hammer Museum in Los Angeles. He holds an MFA from Art Center College of Design and a BA from Brown University. 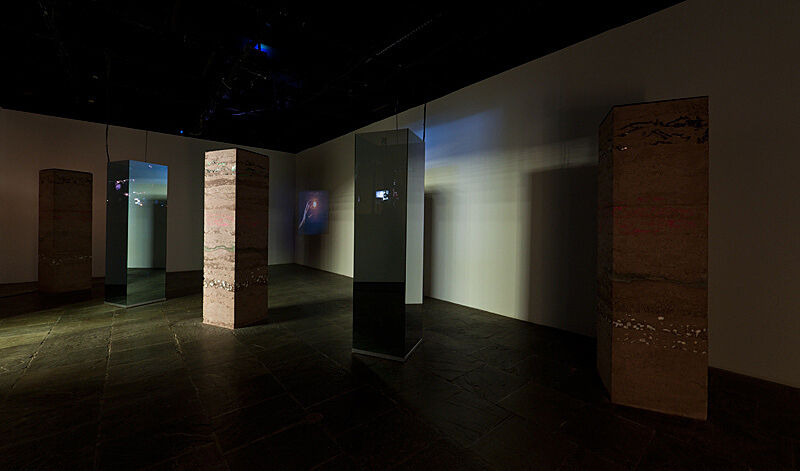