At the turn of the twentieth century, Gertrude Vanderbilt Whitney, an heiress and sculptor born to one of America’s wealthiest families, began to assemble a rich and highly diverse collection of modern American art. This group of objects, combined with a trove of new works purchased around the time of the Whitney Museum’s opening in 1931, came together to form the founding collection. This exhibition features a selected group of works from the approximately 1,000 objects in the Whitney’s founding collection, including iconic paintings by artists such as Stuart Davis, Charles Sheeler, George Bellows, Rockwell Kent, Edward Hopper, and Georgia O’Keeffe, as well as works by lesser-known artists.

Breaking Ground: The Whitney’s Founding Collection is the first in a multiyear series of exhibitions aimed at reassessing the museum’s collection. Unfolding in chronological order over a two year period, these exhibitions will explore overlooked developments in American art and reconsider iconic figures and masterworks within new frameworks and contexts. Breaking Ground is co-curated by Barbara Haskell and Sasha Nicholas.

Ongoing support for the permanent collection and major support for
Breaking Ground: The Whitney’s Founding Collection is provided by Bank of America.

The opening of the Whitney Museum of American Art on West 8th Street in November 1931 was the culmination of Gertrude Vanderbilt Whitney’s long campaign on behalf of American art. Beginning in 1914, she organized exhibitions, lectures, and classes for artists at the Whitney Studio and Whitney Studio Club. At a time when American art was largely overlooked in favor of that of Europe, Gertrude Whitney’s efforts to gain a public for it, combined with her enthusiastic collecting and financial assistance to artists, nurtured the growth of contemporary art in the United States.

By 1929, Gertrude Whitney turned her attention to creating a permanent home for American art. That fall, just weeks before the stock market crash, she announced the founding of the Whitney Museum. Working with Juliana Force, who would serve as the Museum’s first director, she began a concerted effort to bolster the collection of six hundred works she had amassed in the previous two decades. Two hundred works were purchased shortly before the Museum opened; an equal number followed in the Museum’s early years. Together these approximately one thousand objects make up the founding collection, which Gertrude Whitney deeded to the Museum in 1935. Breaking Groundfeatures a selection of these works.

In creating a museum, Gertrude Whitney sought to retain the intimacy and informality of the Studio and Studio Club, as well as their egalitarian, nonhierarchical spirit. Rejecting the severe, white-box model of museum display, she and Force painted the galleries in soft hues of rose, yellow, and blue and decorated them with streamlined Moderne furniture; hallways featured patriotic stars-and-stripes wallpaper. The labyrinthine layout of the galleries—the result of having joined together four residential brownstones—predisposed visitors to meander rather than follow a preset trajectory.

This exhibition is inspired by the Museum’s early approach to installation and its democratic collecting philosophy. Rather than feature the work of only a few artists or selected stylistic movements, the early Whitney aimed to convey the breadth and diversity of American art, from conservative portraiture to modernist abstraction. Tastes change over time; the founding collection includes objects that are now considered icons of American art as well as works that were once esteemed but are now less well known.

Gertrude Vanderbilt Whitney was the daughter of Cornelius Vanderbilt II, the richest man in America at the turn of the century, and the wife of Harry Payne Whitney, scion of one of New York’s wealthiest families. Early in her marriage, she defied social expectations by becoming a sculptor and a major patron of contemporary American art. This sculpture, a self-portrait which stylistically mixes art nouveau and orientalism, is among her earliest successes. A year after completing it, she was commissioned to design a memorial to the Titanic victims in Washington, D.C. Other major public commissions followed, including a monument to “Buffalo Bill” Cody in Wyoming and a memorial to the American Expeditionary Forces in the harbor of Saint-Nazaire, France. Chinoise was included in her one-person show at the Whitney Studio in 1916 and in the Museum’s exhibition 20th-Century Artists in 1939.

In January 1915, Bellows and the radical reporter John Reed traveled to Philadelphia to cover one of Billy Sunday’s revival meetings for New York’s Metropolitan magazine. Sunday was a hugely popular, charismatic Christian evangelist who traveled the country exhorting his followers to “hit the Sawdust Trail” and give their lives to Jesus. In this work, one of several images he made of the Philadelphia meeting, Bellows depicts the moment after Sunday’s sermon, when converts would walk up the center aisle strewn with sawdust and shake the evangelist’s hand. The left-leaning Bellows considered Sunday, pictured here reaching down from the left side of the stage, to be “the worst thing that ever happened to America. . . . He is death to imagination, to spirituality, to art.”

Although the artist described this painting as “almost a literal translation of Seventh Avenue,” he has, in fact, reduced the New York City street to its bare essentials. His composition emphasizes the scene’s geometric armature—the line of rectangular windows, the horizontal stretch of sky and elongated morning shadows—while at the same time minimizing architectural ornament and the legibility of the store window signs.

Hopper’s long relationship with the Whitney began in 1920, when the then-unknown artist received his first-ever solo exhibition at the Studio Club. This painting, which Juliana Force and Gertrude Whitney purchased in 1930, was a centerpiece of the Whitney Museum’s inaugural exhibition and immediately became an icon of the collection. Hopper’s work was shown regularly at the Museum after it opened, and in 1968, his widow Josephine Hopper bequeathed the artist’s estate of more than 2,500 works to the Museum.

Sheeler became a key member of the Whitney circle in the summer of 1923, when he and his wife moved rent-free into the top floor apartment of the Whitney Studio and stayed for eighteen months. His first one-person show at the Whitney Studio in March 1924 ran concurrently with an exhibition he curated at the Studio Club on Cubism, Dada, and African sculpture. Sheeler shared with Juliana Force an interest in early American folk art and textiles, which he collected and often depicted in paintings such as this one. The clean lines and uninflected surfaces he uses to paint the interior scene predict the crisp geometric depictions of industrial architecture that would make him a leading practitioner of Precisionism.

German-born Bluemner was an important member of the modernist circle that formed around Alfred Stieglitz’s galleries, 291 and the Intimate Gallery, in the early twentieth century. When his critically acclaimed but financially disastrous 1928 exhibition at the Intimate Gallery severed his relationship with Stieglitz, Bluemner desperately sent six of his unsold works to Juliana Force, who included them in the Studio’s annual Christmas show. In November 1929, the Studio presented a one-person survey of his vivid, richly symbolic landscape paintings. Though the stock market crash had occurred just weeks before the exhibition, Force and Gertrude Whitney purchased this and one of Bluemner’s seminal 1914 paintings. They subsequently acquired Composition (1931), also on view in Breaking Ground, from the Museum’s first Biennial Exhibition in 1932.

Juliana Force’s roots in Buck’s County, Pennsylvania, ignited her passion for American folk art, which she featured at the Whitney Studio in 1924 in the first exhibition of folk art ever held in America. In addition to the vanguard works she acquired for the Whitney Museum’s 1931 opening, Force also purchased examples of folk painting, including this work by Pickett, a self-taught painter who was also a storekeeper in New Hope, Pennsylvania. The painting depicts a Revolutionary War scene in Coryell’s Ferry, as New Hope was then known. A doll-like figure of George Washington stands on the hill, watching for his troops to be ferried across the Delaware River after their defeat in New York and subsequent flight across New Jersey. Following these events, Washington would cross with his troops back over the Delaware and launch his famous surprise attack on British forces.

In the late 1920s, the Whitney Studio Club offered early support to several artists who would become leading figures of Regionalism, a nationalistic, narrative style of painting focused on subjects from the American Midwest. One of these artists was Curry, who joined the Whitney Studio Club in 1928. Convinced of his potential, Gertrude Whitney and Juliana Force provided Curry with a two-year stipend that allowed him to return to his native Kansas to paint. Baptism in Kansas, a product of these trips, became one of the early icons of the Regionalist movement. The painting’s subject matter signaled the new interest in rural, small-town values that would become increasingly prevalent during the Great Depression. The painting was exhibited in Curry’s first one-artist show at the Whitney Studio in January 1930 to critical acclaim—as The New York Times decreed, “Kansas has found her Homer.” 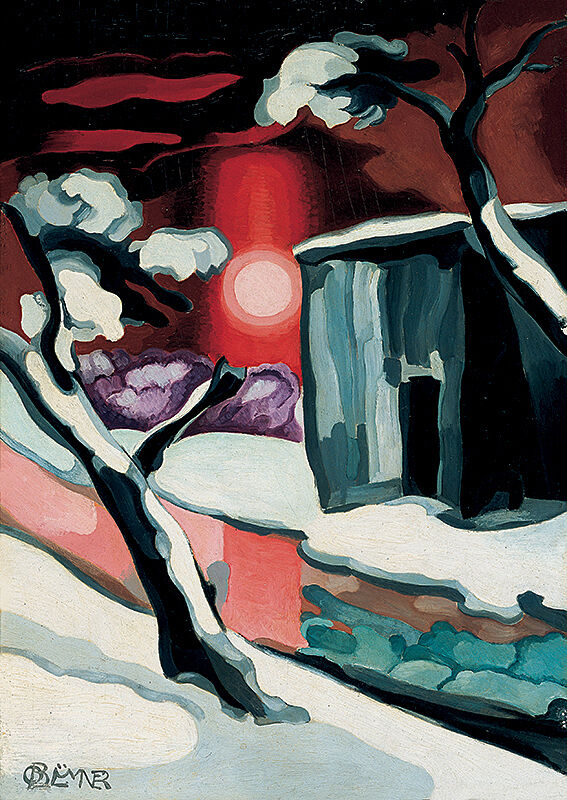 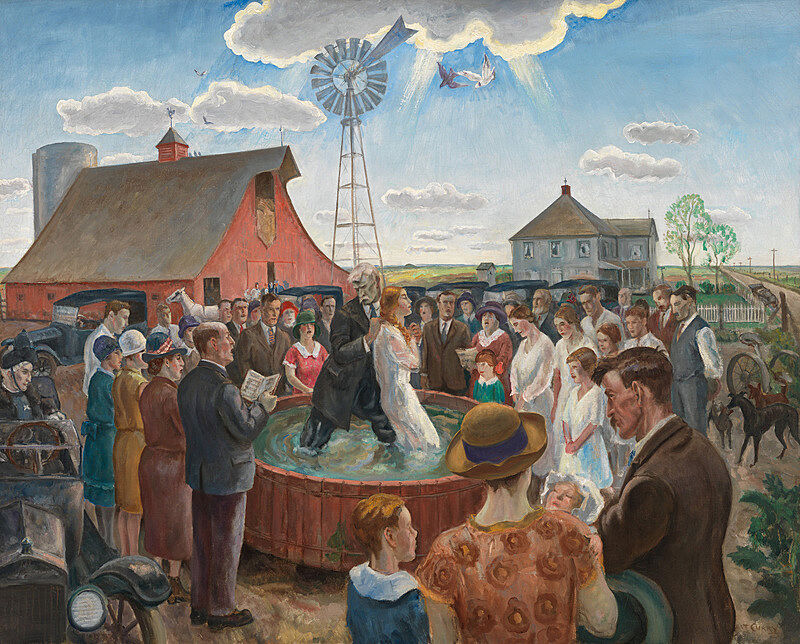 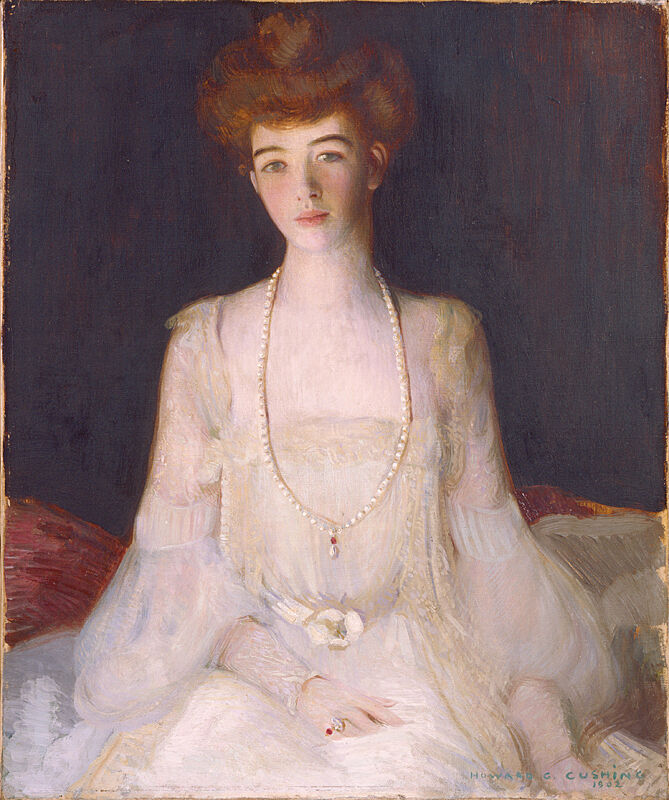 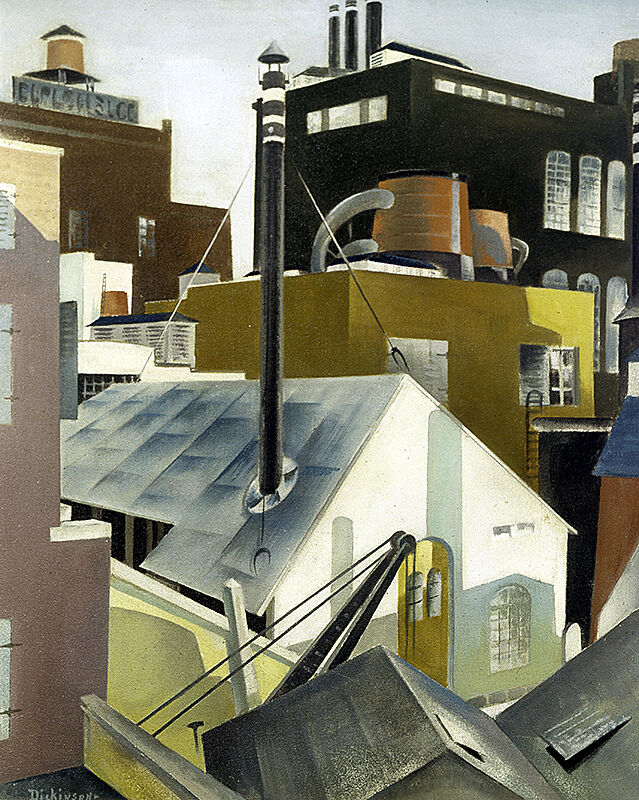 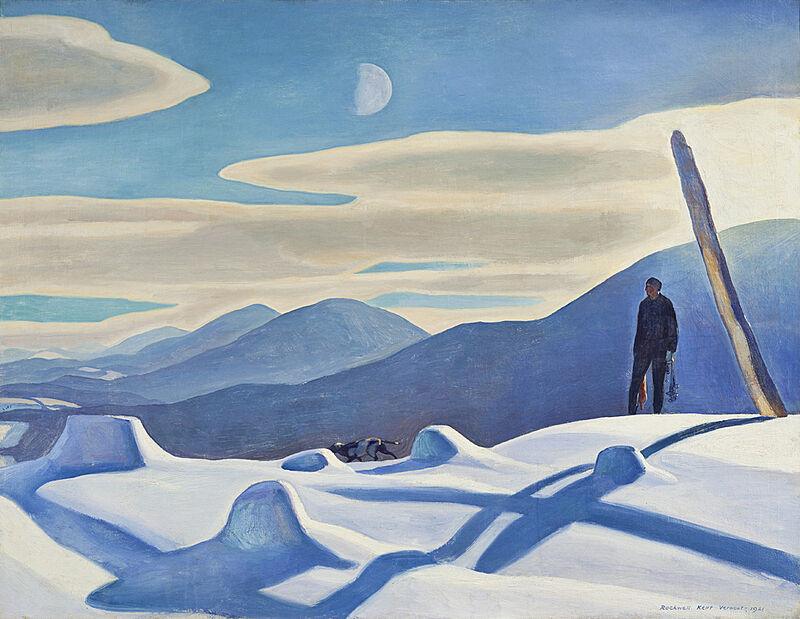 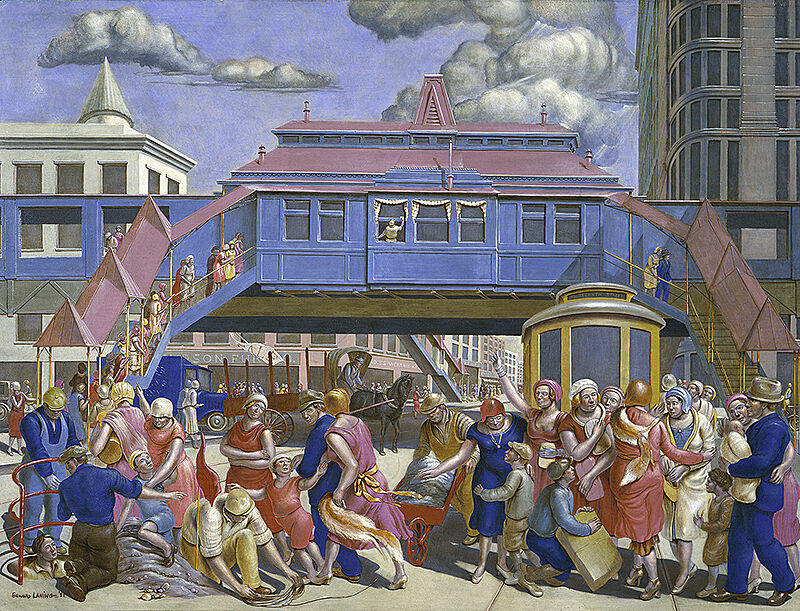 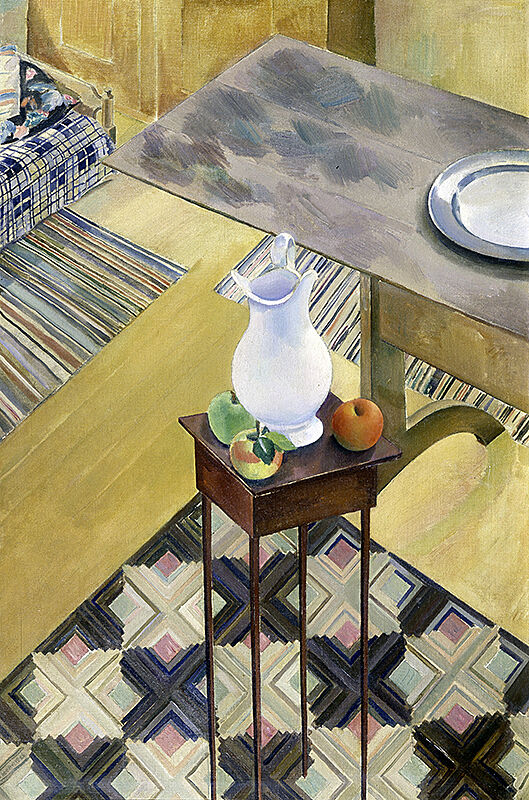 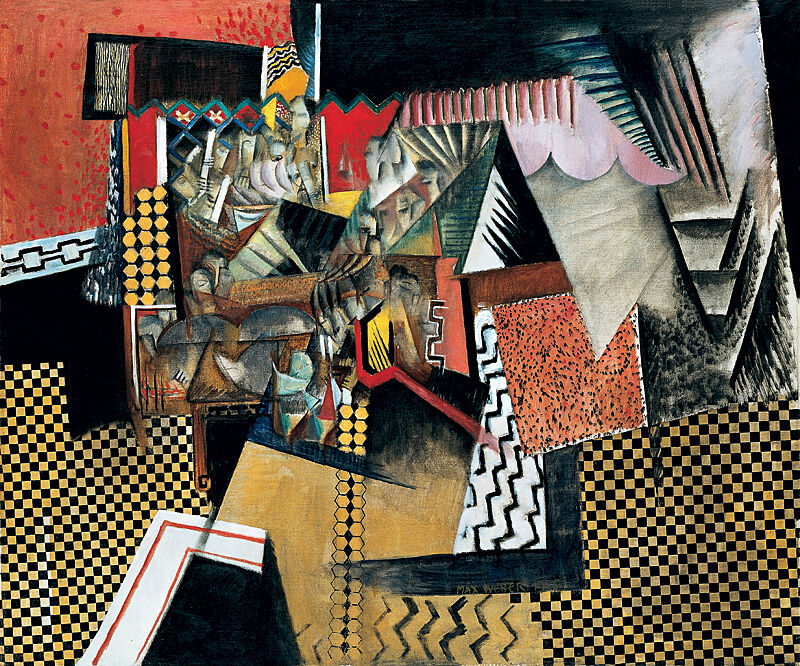