In this image, Raven Chacon captures a scene at the Oceti Sakowin camp near Standing Rock Indian Reservation in North Dakota during the 2016–17 No Dakota Access Pipeline (NoDAPL) resistance, which protested the construction of a pipeline that would threaten the Sioux Tribe’s safety and rights as a sovereign nation. It documents a moment that took place over Thanksgiving weekend in 2016 when, in Chacon’s words, “a group of hundreds of water protectors, headed by women leaders of the camp, confronted and stared silently at the DAPL security and North Dakota state police barricading access to the lands north of the camp.” Despite mass opposition to the pipeline, sustained protest, and some legal stays, the pipeline continues to operate.

This image highlights moments of resistance, hope, and collective action as it underscores the massive impediments to environmental and Indigenous justice. More works by Chacon, including an audio recording of the moment depicted here, are part of the 2022 Biennial on view at the Whitney Museum of American Art.

Raven Chacon’s Silent Choir (Standing Rock) (2017–22) is part of Outside the Box programming, which is supported by a generous endowment from The Jacques and Natasha Gelman Foundation. 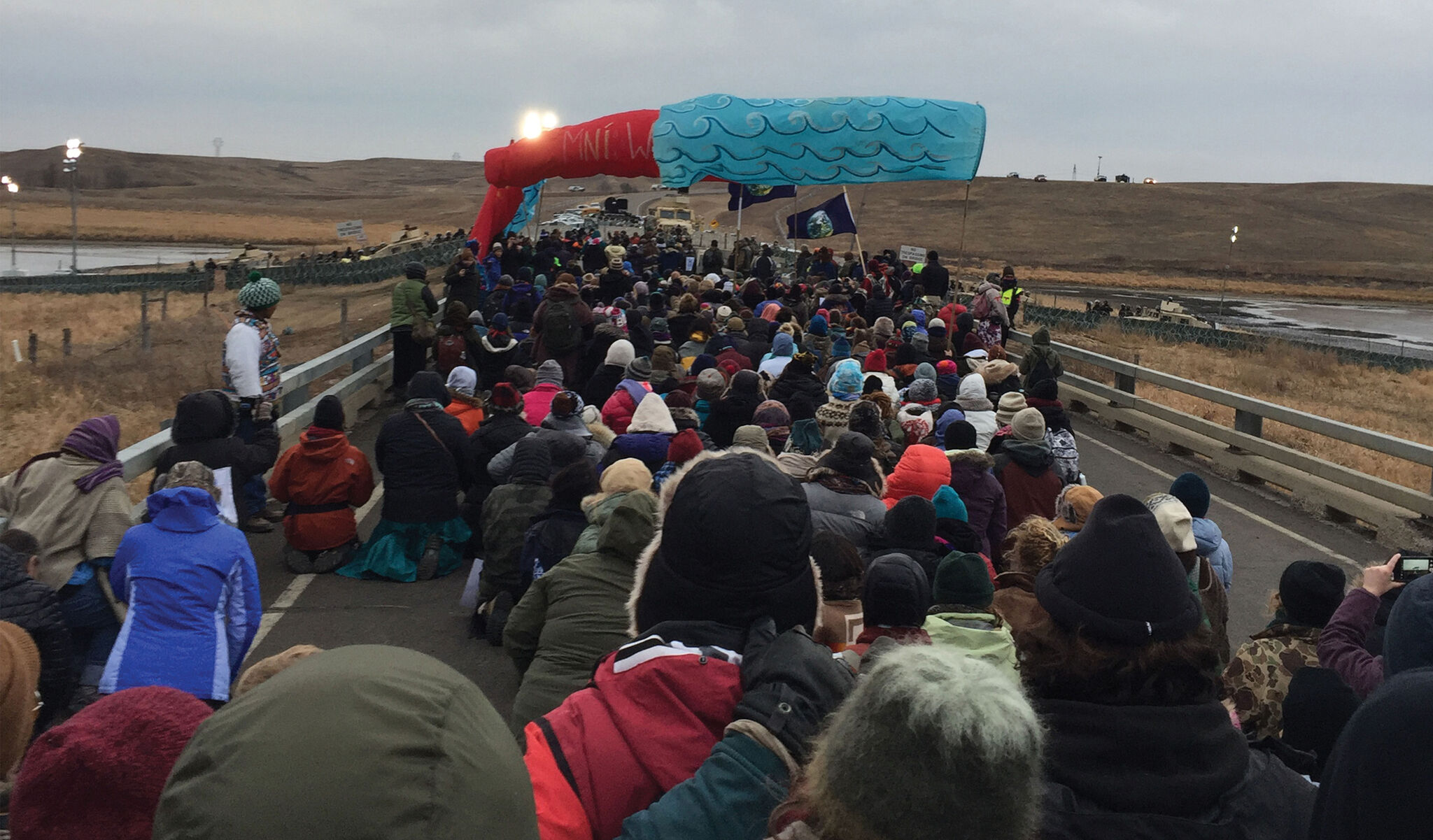 Raven Chacon: Silent Choir, both in the audio form and the photograph form, were never intended to be an artwork. I went to the Standing Rock Reservation during the #NoDAPL water protection that was happening in 2016. And I came as a guest, as another American Indian trapped in this country who wanted to understand what was happening in this place. At the same time, be another presence, another witness to this as well, but mostly watching and listening.

Narrator: The recorded sounds from this moment are on the sixth floor of the Biennial inside the Whitney Museum.

On the Sunday after Thanksgiving, the elder women of the encampment led a silent resistance on the bridge that connects the reservation to Bismarck, North Dakota. They faced state police and DAPL—or, Dakota Access Pipeline—security.

Raven Chacon: Led by these women, this group of people came onto the bridge and just stared at the police. And didn’t say a word. No yelling, no pleading, nothing. Just staring. And so, what I was able to capture was the sound of five or six hundred people just being absolutely silent and staring at the police. In retrospect, when I went home and listened to the recording, I could feel the power of those bodies, of those people, American Indian people and allies confronting and having to not say a word.

Narrator: Installed at second-story height across from the southern tip of the High Line, the image appears to recreate this scene here in New York City.

Raven Chacon: Even though I had not intended this image to become an artwork, let’s say, I’m grateful that the curators had seen that this was a transposable image, as if police would barricade off the Highline. One might find themselves on that side of such a situation.

So, to be able to see that these images or these point of view photos could be transposed in your own home, I think can be a very powerful experience.