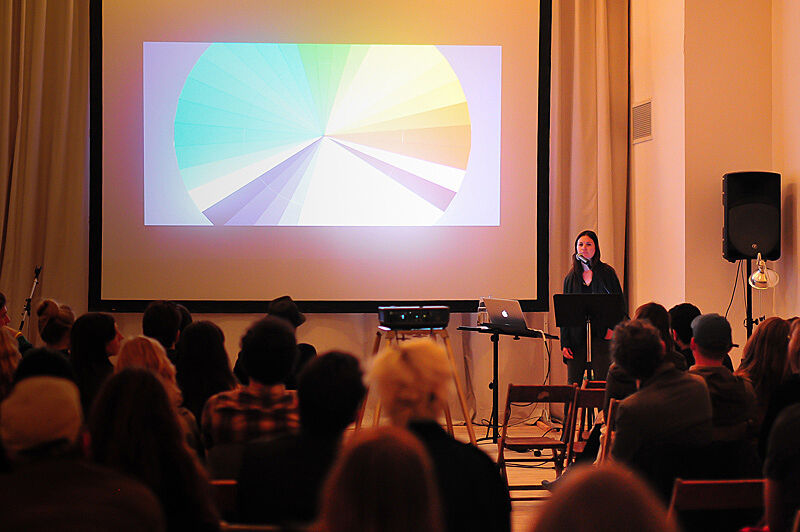 For this program, Lucy Raven shares a series of rarely seen test films—snippets of narrative assembled only for the technical information they contain, dating from the 1940s to today. These sights and sounds—seldom seen or heard outside of a film projection booth—tell alternate stories about the moving pictures and how we view them.

Born in 1977 in Tucson, Arizona
Lives and Works in Oakland, California and New York

The test patterns and calibration charts featured in Lucy Raven's 2012 Biennial installation are used by film projectionists to fine-tune focus, aspect ratio, resolution, and steadiness of image before loading a film for the audience. The charts include both contemporary and historical examples from film and digital cinema, each made as a standard to test a particular projector. To Raven, the test chart is also a formalist genre: an image reduced to the formal characteristics of its medium. intended only for the eyes of the projectionist, and the mechanical eye of the projector, these are images that you’re not supposed to see but which are created to make you see better; together, they pose questions about sight and its fidelity.

The player piano installed by Raven also examines the effect of digitization on analog processes. Player pianos operate via an early form of binary code: Holes punched into paper rolls function like 1s and 0s. The holes correspond to notes on the piano, which pumps air through the holes to sound the notes. The piano here plays three arrangements (composed by fellow Biennial artist Jason Moran) of a song by the band LCD Soundsystem (active 2001–2011). Through this juxtaposition of the old and the new, the instrument’s historical connection to digital technology comes to the fore.

Raven’s practice encompasses a wide variety of forms, including animated films, sculptural installations, performative lectures, curatorial projects, art criticism, and interventions into live television. Connecting all of these disparate strands is the artist’s continuing exploration into the effects of technology on the world.