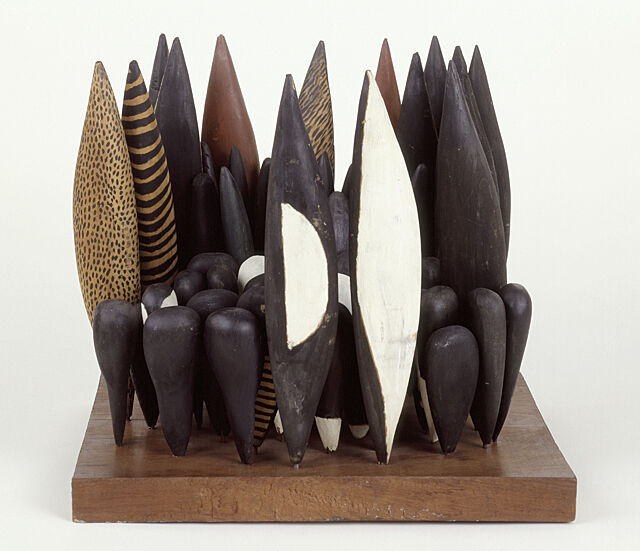 Louise Bourgeois, One and Others, 1955

Narrator: In this sculpture, Louise Bourgeois assembled a cluster of small oblong carved pieces of painted wood. The structures seem vaguely anthropomorphic—like bodies, but armless and faceless. The work, called One and Others, embodies one of the central themes of her career—the relationship between the individual and the group. Made in 1955, the sculpture is the last of a series called Personages, which she began in the 1940s, after emigrating to the United States from France. As she described the series, “Even though the shapes are abstract, they represent people. They are delicate, as human relationships are delicate.”

As you look at the individual painted and shaped elements, notice how some are the same and some are different. In her sculpture, Bourgeois recreates the complicated dynamics of group behavior and identity. A few of the forms seem to stand alone, while others fade into the anonymity of the crowd.

As Bourgeois once stated, “The relation of one person to [his or her] surroundings is a continuing preoccupation. It can be casual or close; simple or painful or imaginary. This is the soil from which all of my work grows.”

Louise Bourgeois, One and Others, 1955