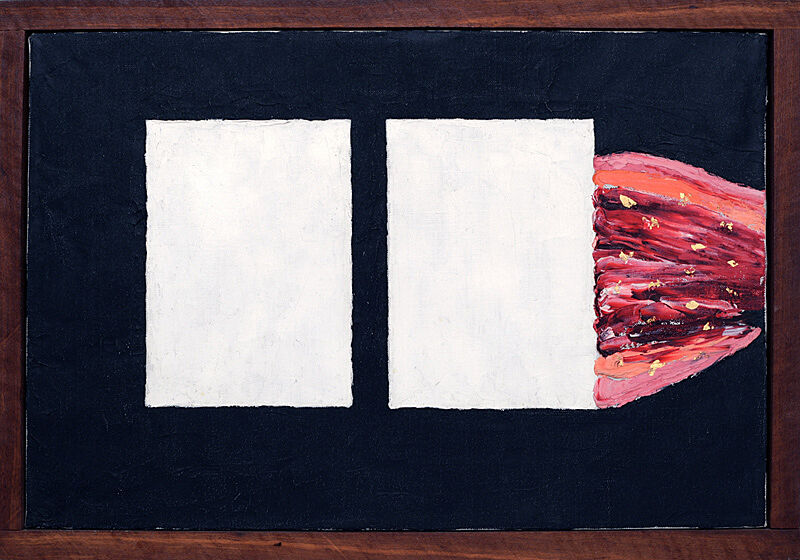 Narrator: For the Biennial, artist Robert Gober has curated a room of paintings and archival material by Forrest Bess. Bess lived from 1911 to 1977. During his own lifetime, he was best known as a painter. But he also produced an extensive series of notes and documents pertaining to surgery he performed on himself, anesthetized only by alcohol.

Robert Grober: He lived this incredibly physically isolated, self-determined life as a bait fisherman off the coast of Texas, but at the same time was not unsophisticated and managed through his own wiles to exhibit his work with Betty Parsons in New York in the late 40s at the same time that Betty Parsons was showing Pollock and Newman and people like that. It was sort of a fascinatingly bifurcated existence that he could pull of these two extremes at the same time.

During his lifetime Bess kept a large scrapbook, journal, manifesto, diary that he called his medical thesis.

And what it is is a hand-made, cut-and-pasted, repository of his thoughts, other people’s thoughts, everything–images from Mesopotamia, from alchemy, from medieval texts, to psychotherapy, medical journals, his thoughts, his dreams. It combined all of these different, disparate, across-the-ages arts elements together in an attempt to prove this idea that he got that by joining the male and the female within himself physically, through a series of operations, that he could achieve eternal life.

One thing that Bess always wanted to do was to combine, within an exhibition, his medical thesis with his paintings. His dealer, Betty Parsons, always politely declined. So what this exhibition is, in a nutshell, is my attempt, based upon his wishes as expressed in his letters, to the best of my ability make the show happen that never happened during his lifetime. Which is to combine the two things. So there’s—I think there’s ten borrowed paintings on the walls, and then the vitrine filled with documentation that hopefully fleshes out what he did to his flesh.

Narrator: To hear more about Bess and his paintings, please tap the screen.