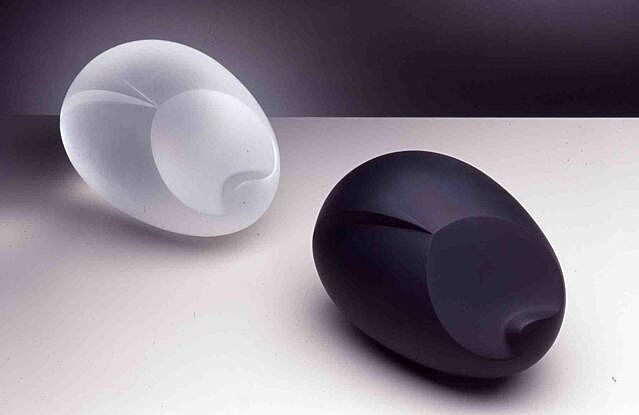 Narrator: Crystal Newborn and Black Newborn are made in sandblasted glass. They take their form from a sculpture called The Newborn by Constantin Brancusi. Levine has installed them on top of grand pianos, something she began doing after seeing a photograph of a Brancusi exhibited this way in the home of a British collector. This display foregrounds the ways art is shown differently in the domestic sphere and reveals much about the operations of class.

Levine made the sculptures with the cooperation of the Philadelphia Museum of Art, which owns a version of Brancusi’s Newborn.

Howard Singerman: The work itself, The Newborn, is a remarkable work.

Narrator: Howard Singerman is an art historian and critic.

Howard Singerman: It is compact, it is smooth, it is aerodynamic: it's a kind of wonderful abstraction or encapsulation, on Brancusi's part, of a kind of birth, an origin, that first cry in the world of the newborn. And indeed the idea of an origin was a crucial idea for Brancusi that he works over and over again in this egg‑like form. The fact that he works it over and over again is, in a sense, where he issues the invitation for Sherrie Levine to make the work after Newborn, to continue his series of newborns.

So there is a play here both within Brancusi's practice and within Levine's of taking that which is the emblem of the origin and to allow it to continue to spread, to stretch out across the century and into the twenty-first here in this exhibition.