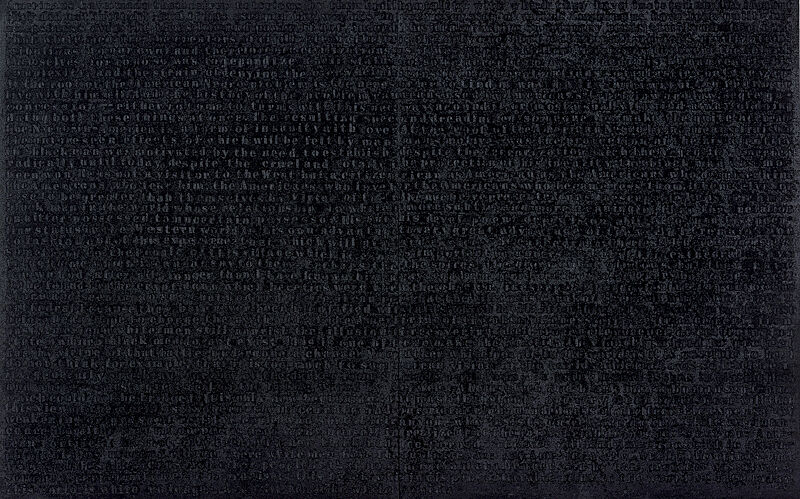 Narrator: This large, almost entirely black diptych is one of nearly two hundred works by Ligon that grapple with James Baldwin’s 1953 essay “Stranger in the Village.” Glenn Ligon.

Glenn Ligon: The essay starts out with a description by Baldwin of the Swiss town that he's living in, in the early 1950s. He's gone there at the invitation of his lover, Lucien, . . . and he's working on a novel. But he says that for many of the villagers, he is the first black person they have ever seen. And so, the essay becomes about this fear and fascination, which is the response to his presence.

Narrator: The painting features the essay’s final three paragraphs, but the words are almost impossible to see, let alone read. Ligon layered the surface with paint, glue, and glittering coal dust, a toxic and highly combustible by-product of the coal mining process. Coal dust also came to have a deeper association for Ligon.

Glenn Ligon: The fact that it's a leftover thing seemed parallel to some things that Baldwin was talking about. Baldwin often said that it's from the margins of society that you get the truth, that the people who most accurately can talk about what a society means are the people at its margins. And so, I was really interested in using this material that's the leftover stuff, but in the space of the painting becomes very beautiful, becomes very alluring, becomes very poignant.

Narrator: The dark image reflects Baldwin’s feelings of loneliness and estrangement. But he concludes on a note of optimism. In Europe, in the 1950s, he is regarded as an exotic rarity. But the close and intertwined history between black and white Americans, may, in Baldwin’s words, be “something of an achievement.” Baldwin writes, “It is precisely this black-white experience which may prove of indispensable value to us in the world we face today. This world is white no longer, and it will never be white again.”