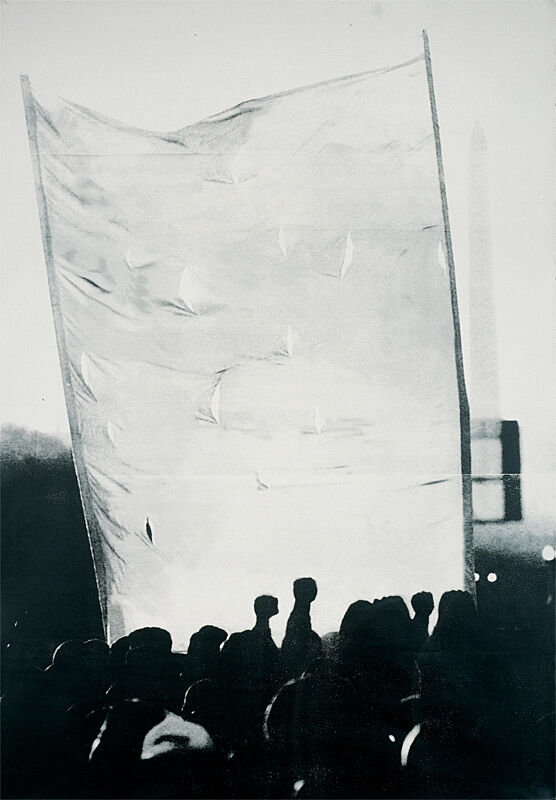 Narrator: A crowd of men, with fists raised, salute an empty banner. This image is from a body of Ligon’s work reflecting on the Million Man March, which took place in 1995 in Washington DC. Its organizers, Louis Farrakhan and the Nation of Islam, promoted it as a day for black men to pledge solidarity and responsibility. Women were banned and asked instead to observe a “Day of Absence”—which became Ligon’s title for this series as a whole. The ghostly white banner powerfully conveys the sense that something is missing.

Ligon chose not to attend the event. Like many, he experienced it through the media. He made this work by enlarging a photograph and printing it on unstretched canvas to evoke the banners the marchers carried. He removed the text from the banner, which had read “We’re Black and We’re Strong.” Like his stenciled text paintings, the process of making the work distorted the information Ligon presented.

Narrator:  It is nearly impossible to distinguish individual faces and bodies—they are subsumed by the group.

The Million Man March was controversial from its inception. Who was included and who was excluded? What image of masculinity did it put forward? And in the end, was it effective? Ligon doesn’t try to answer these questions, but the series serves as a complex meditation on them. As pictures of protest, these images are eerily silent.