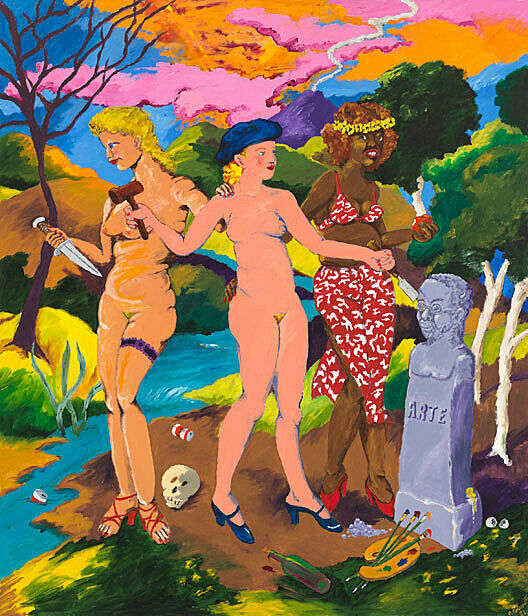 Lowery Sims: We'll start with the grace at the left. She wears only a garter on her left thigh, and red open strap sandals. Curiously she holds a knife pointed dangerously towards her own body.

The central figure is fair complected, with vivid blonde hair. She wear an artist's beret and black Mary Jane shoes. She holds the hammer in her right hand, which is extended upward, in a preparation to make contact with the chisel that is aimed at a square pillar with the head of a man. The head is a self-portrait of Colescott and he designates himself as representing art, as you can see by the word arte.

There is a self-deprecating quality to this depiction, as he paints himself about to be demolished by the central figure. The image has a character of what is known as Vanitas, or a concept that talks about the fleeting quality of life and things. This is a familiar theme in Colescott's work, where he depicts himself succumbing to romantic obsessions.

The third figure is clearly black, and she has a reddish afro crowned by yellow flowers. She wears a red and white patterned bra and sarong skirt, and red shoes and holds an apple in her hand. Evocations of Eve, perhaps in the garden.

I think that what we can see here is how Colescott in his astute familiarity with art history uses themes that are familiar to us that he not only redirects, but recreates to find new narratives around gender and race, and also as he's often said, to interject black people into art history.