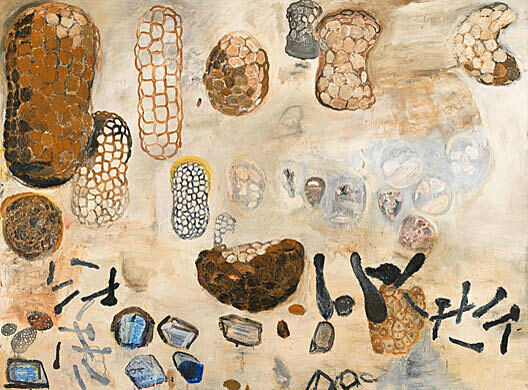 Narrator: Artist Terry Winters draws from biological and botanical imagery to create the enigmatic shapes you see in this painting. The large forms hovering on the top look like honeycombs and the black shapes drifting along the bottom seem reminiscent of chromosomes. These semi-abstract forms allow Winters to explore a variety of painting techniques.

Terry Winters: There is a way I was trying to develop an almost encyclopedic range of paint applications across the surface. So there’s a range of paint handling from very thin and transparent layers in the, sort of the middle section of the painting, to these very densely impastoed constructions of the forms in the upper left of the painting. And some forms that are much more volumetric and others that are built out of linear constructions.

Just as there was an interest in developing different kinds of paint surfaces, there was also an interest in the range of techniques and paint applications that could be applied to the picture. So there was a classical use of brushes but also rags and painting knives that were also used in getting the paint on the surface.

Narrator: The title of the painting, Good Government, is in part a reference to a famous fourteenth century Renaissance fresco by Ambrogio Lorenzetti, which Winters saw in Siena just before making this work. But it also refers to the way everything in the painting comes together.

Terry Winters: And at some point the picture, all of these disparate elements came together for me in some sense. It reminded me a bit of those charts you would see in elementary school about good government, where all the different things were all working together. And it took on that almost sort of modernist, formalist idea about when the painting is working, and suddenly it was all sort of working.