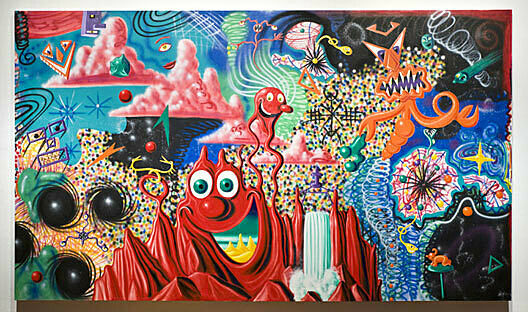 Kenny Scharf, When the Worlds Collide, 1984

I made up a manifesto back in ‘81 where I define the term “Pop Surrealism.” I kind of came to the conclusion that because of my very early bombardment, by the media, of saturation with advertisements and television and everything, that my subconscious was filled with pop imagery.

I’ve had a long fascination with science fiction, the movies from that time usually stem from the fear of nuclear catastrophe, which is, you know, the greatest threat of all. It’s such an unfathomable, scary thing that I naturally think about things like that.

This painting, actually, I painted it in my very good friend Keith Haring’s studio. I had no studio at the time, I don’t remember why, and he was away and he lent me his studio. And that’s why, if you see on the bottom right there’s my version of a Keith Haring baby on a little pedestal and that’s my little thanks to him for letting me use his studio to do the painting.

Kenny Scharf, When the Worlds Collide, 1984