Julie Ault’s work is on view in the Museum’s third floor galleries.

Marvin J. Taylor is an archiving activist and the director of the Fales Library and Special Collections at New York University. This conversation between Taylor and Ault is part of Ault's contribution to the 2014 Biennial.

The art practice of Julie Ault encompasses many roles not typically associated with the visual artist, including that of archivist, curator, editor, and theorist. Invited to assemble a “show within a show” for the 2014 Biennial, Ault selected as points of entry works by David Wojnarowicz (1954–1992) and Martin Wong (1946– 1999) from the Whitney’s permanent collection, exhibiting them alongside artifacts from these artists’ personal archives, held by the Downtown Collection at New York University’s Fales Library. Both Wojnarowicz and Wong were active in New York during the 1980s and early ’90s, when Ault was a member of the influential artists’ collaborative Group Material. Ault has since maintained her commitment to a practice defined by collaboration, exchange, community and research, tracing vital links between art and politics.

Departing from the dominant narratives that have sought to represent the era of Wong and Wojnarowicz as a period marked primarily by the AIDS crisis and the culture wars, Afterlife: a constellation recontextualizes their work in this atmospheric installation, whose geographical compass extends from downtown New York to the Sierra Nevada. A range of voices, energies, artworks, artifacts, and texts, all displayed as equal participants, invoke themes of disappearance and regeneration and the notion that subjectivity is an integral dimension of archiving and historical representation. The works on view in the Biennial include a photograph related to the Donner Party migration; entryway mirrors inspired by the ones that adorned Liberace’s mansion in Las Vegas; copies by James Benning of a ledger drawing by Black Hawk (1832–1890?) alongside a hand-lettered sign by Jesse Howard (1885–1983); a book by Martin Beck about David Mancuso’s “The Loft” communal dance parties; a slide show by Matt Wolf that explores Wojnarowicz’s personal archive of ephemera; a heliogravure by Danh Vo of the newspaper announcement of the marriage of Barbara Bush (née Pierce); a poetic misfile as sculpture by Robert Kinmont; an interview with the founder of the Downtown Collection, Marvin Taylor; and textual elements written and compiled by Ault.

Julie Ault discusses mirrors in the two entryways of her 2014 Biennial installation that were inspired by similar mirrors in Liberace's former Las Vegas mansion.

Works From the Installation
Afterlife: A Constellation (2014) 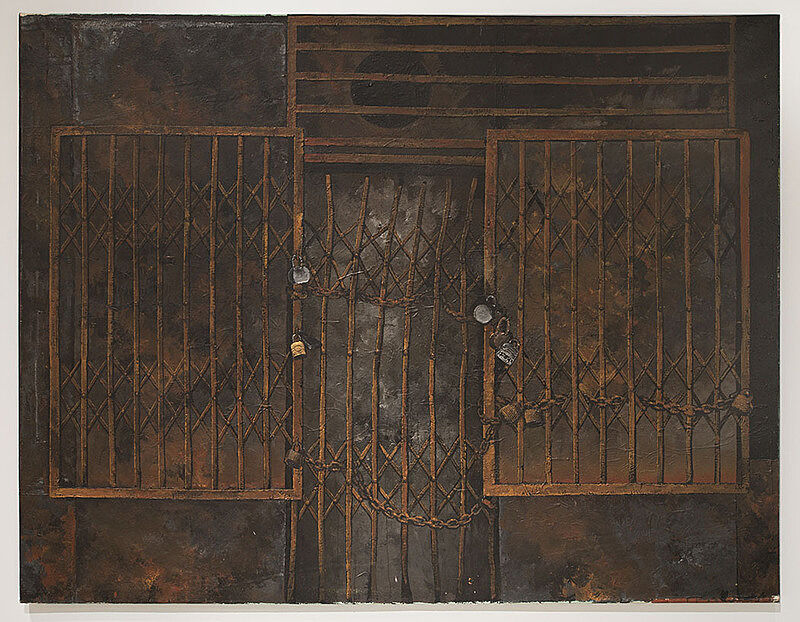