Related exhibition
The exhibition no existe un mundo poshuracán: Puerto Rican Art in the Wake of Hurricane Maria is on view November 23, 2022 through April 23, 2023.

(There are hurricanes that ravage a country and
there are countries that swallow
hurricanes . . . and spit them back.)
—Ana Teresa Toro

A birth, in a way, is the opposite of a blackout. The month before Hurricane Maria made landfall on September 20, 2017, my daughter was born in a New York City hospital. I was far from my hometown of Río Piedras, but I was glad she would begin life in a city with tight connections to the nation where I was from. Just a month into motherhood, I saw the archipelago subsumed within a darkness that was as literal as it was metaphoric. The irony was painfully clear that as I nursed my child in those early days of her life, many Puerto Rican lives would be lost as a consequence of the storm.

Life would not be the same, goes the aphorism. While that may be true, life in Puerto Rico had already been altered, many times throughout its history. The most recent transformative event had occurred in 2015, when it first became known that Puerto Rico had amassed, and was incapable of paying, a massive debt of $72 billion, plus $50 billion in pension obligations. Due to expiring tax breaks for US corporations that operated in Puerto Rico, and the steep economic downturn that gripped the United States beginning in 2007, hundreds of thousands of jobs were lost, especially from the pharmaceutical companies that operated manufacturing plants on the archipelago. In 2016, the US Congress passed the Puerto Rico Oversight, Management, and Economic Stability Act—PROMESA, which, with cruel irony, means promise in Spanish. The legislation established a fiscal-oversight board responsible for managing the debt, largely through austerity measures that would ravage public services such as education, infrastructure, and health care. In a clever linguistic rebuttal, the board has become known as La Junta, accurately translating the word board into Spanish while also letting Congress know how these overseers are really seen in Puerto Rico—as a colonial version of the Latin American military juntas of the 1960s and 1970s.

Against this perverse backdrop, Hurricane Maria made landfall in 2017. The crises that had been accumulating were compounded by subsequent events, then multiplied by the enormous trauma caused by the utter disregard of the local and federal governments to give Puerto Ricans a dignified life. In 2022, blackouts remain constant, schools continue to close, residents are being priced out of their homes, and inflation keeps rising. The conditions of life in Puerto Rico, some have said, make living there impossible. As a city of the dead—a necropolis—is how many Puerto Rican thinkers have viewed the archipelago post-Maria.

Graffiti (“They're killing us”) on a wall in San Juan, 2021. Photograph by Joaquín Villanueva

An extension of Frantz Fanon’s postcolonial thinking, necropower was first theorized by Cameroonian philosopher Achille Mbembe as the fundamental condition of colonialism.Achille Mbembe, Necropolitics, trans. Steve Corcoran (Durham, NC: Duke University Press, 2019).In necropolitics, sovereign countries have the power to define the conditions of life and death for their subjects. Hilda Lloréns and Maritza Stanchich have articulated the concept with regard to Puerto Rico. “The focus on paying the debt over protecting Puerto Rican lives and environment is illustrative of the extractivist, exploitative nature of the colonial relationship itself,” they write. “The perpetration of ‘slow violence,’” the scholars continue, “through enactment of neoliberal policies that have increased dispossession via the loss of life, land, and environmental health—while global financial capital continues to accumulate wealth at the expense of Puerto Rico’s communities—has long inscribed Puerto Rican lives as expendable.”Hilda Lloréns and Maritza Stanchich, “Water Is Life, but the Colony Is a Necropolis: Environmental Terrains of Struggle in Puerto Rico,” Cultural Dynamics 31, nos. 1–2 (February–May 2019): 92.Surviving death is the modus operandi.

However relentless and debilitating these forces feel at times, Puerto Ricans have continually resisted their own disappearance. In 2019, with the unique combination of courage and despair that more than five hundred years of colonization can produce, the people chose to imagine a different outcome for themselves and for those 4,645 Puerto Ricans who perished as a consequence of the hurricane. That summer, exhilarated and jubilant masses stood against and removed then-governor Ricardo Rosselló from power. The Verano del 19, as it became known, was a historic win for the nation.

The ouster demonstrated the people’s ability to defeat an incompetent politician, whose venality had been exposed through a leaked chain of Telegram messages with his cronies in which he crassly attacked virtually every sector of the populace, including the hurricane’s victims. The triumph also represented a point of no return, a refusal to be powerless. The viral cry of #YoNoMeDejo (I will not allow it) echoed throughout the world.Some examples of international news articles that covered the events of the summer of 2019 include Reuters, “Protesters Hit Streets, Seek Resignation of Puerto Rico’s Governor,” Saudi Gazette, July 22, 2019; Reuters, “San Juan Police Fire Tear Gas to Disperse Protesters,” Japan Times, July 23, 2019; and Nicolas Bourcier, “Le gouverneur de Porto Rico démissionne, après deux semaines de manifestations,” Le Monde, July 25, 2019.A collective catharsis, the Verano del 19 saw protest manifested in myriad creative ways, producing images that offered an exciting counterpoint to the tropes of a barren nation perpetuated in mainstream media in the aftermath of the hurricane.

Protests were as much an aesthetic rally as an attempt to rebuild the nation. Groups of mostly feminist, queer, Black, and working-class people were the architects of that blissful summer, which saw people dancing perreo in the Catedral de San Juan Bautista, a cavalcade of horseback riders descending on the capitol, and near the governor’s mansion, a yoga session serenely clamoring for Rosselló’s resignation.Charo Henr.quez, “Puerto Rico Protests Got Creative: Dancing, Singing, Diving . . . ,” New York Times, July 24, 2019.A panoramic view of those days would yield an image of a national wake—a velorio in defense of the dead.

As much as the Verano del 19 rocked the political foundations of Puerto Rico, what followed would again put the archipelago to the test. Six months after the removal of Rosselló, a chain of earthquakes shook houses and schools on the southern coast, destroying many and replacing the joy of that hopeful summer with fear. Around the same time, an increase in femicides, transphobic murders, and domestic violence cases became another public health emergency. Then the pandemic arrived. Despite imposing a strict lockdown in the early weeks of the arrival of COVID-19, the Puerto Rican government’s lack of transparency, plus the self-interest of politicians wanting to reopen the economy during an election year, left the population once again misinformed and, perhaps worst of all, despondent.

No existe un mundo poshuracán: Puerto Rican Art in the Wake of Hurricane Maria borrows its title from a line in Raquel Salas Rivera’s book of poems while they sleep (under the bed is another country).Raquel Salas Rivera, while they sleep (under the bed is another country) (Minneapolis, MN: Birds, LLC, 2019).The verse resists facile translation, but in English, it yields, “A posthurricane world doesn’t exist,” or “There isn’t a world posthurricane.” The awkwardness of this second phrase is the more productive for the purposes of this exhibition. Contained within its clumsy syntax in English is a rearranging of a world order that never considered Puerto Rico to be an example from which the rest of the world could learn. Post-Maria Puerto Rico is a harbinger of things to come for those who are most vulnerable, not just in the Caribbean but worldwide. There is no place on earth that is safe from the colossal gusts of the climate crisis and capitalist colonization. A posthurricane world doesn’t exist.

Put differently, what would it require to imagine a future beyond this current maelstrom? No existe un mundomposhuracán wrestles with the fact that the real disaster is the thought of its perpetuity, the belief that Puerto Ricans are and will continue to be caught in the wake of Maria. Respectfully inspired by the work of Christina Sharpe, I summon the wake as a way to invoke multiple meanings.Christina Sharpe, In the Wake: On Blackness and Being (Durham, NC: Duke University Press, 2016).Maria did not happen in a vacuum; it happened in and to a nation carrying in the wake of its history the vestiges of Spanish colonization, followed by the American colonial project. Present-day Puerto Rico is, metaphorically speaking, the flotsam and jetsam of this double colonization. Those who survived the storm quickly realized that the aftermath of the hurricane was going to be a perpetual vigil over those who did not. In that sense, the wake is being unable to transcend this moment—these crises and catastrophes—without draconian austerity measures on the one hand and the infusion of lucrative tax breaks for outsiders on the other. Not being able to imagine a posthurricane moment forecloses the possibility to craft a Puerto Rico for and by Puerto Ricans. This is a form of colonial death, leave no doubt about it.

But there is another way to understand no existe un mundo poshuracán, one that does not negate or gaslight a very real sense of angst and defeat but that sublimates these feelings into what Yarimar Bonilla calls hopeful pessimism. “Unlike a cruel optimism that blinds us to the threats of the present,” Bonilla argues, “a hopeful pessimism opens our eyes to the hard tasks required to transform the here and now.”Yarimar Bonilla, “Postdisaster Futures: Hopeful Pessimism, Imperial Ruination, and La futura cuir,” Small Axe 62 (vol. 24, no. 2) (July 2020): 157.Seen through the lens of hopeful pessimism, no existe un mundo poshuracán rejects this world altogether in favor of the creation of new modes of existing politically. As a poetic verse conceived in the immediate aftermath of Hurricane Maria, Salas Rivera’s line stakes a claim for artists to be stewards of imagining this new future.

No existe un mundo poshuracán brings together artworks made in the last five years by an intergenerational group of artists born in Puerto Rico and its diaspora between the 1940s and the 1990s. These artists are not necessarily concerned with representing Hurricane Maria. Rather, they seek to analyze the structural cracks left by the storm. They denounce the pervasive and ubiquitous ways in which the Puerto Rican necropolis is the ultimate expression of its colonization. For them, to resist is a multidimensional, multimedia verb that forcefully shakes the infrastructure of the colonial design.

The contrast between the images of Hurricane Maria, pushed by news outlets and consumed from the outside, and those of the Verano del 19 suggests that there is more to the visual discourse of Puerto Rico than images of destruction. In the years after Maria, artists of all genres have added nuance to the words of politicians and to the media coverage, attempting to redress a wound that had been left without any poetics. The outpouring of creative expression that has happened in these years, which includes music, performance, theater, poetry, graphic design, visual arts, and even memes, can accurately be described as a Puerto Rican renaissance, a rebirth in the face of death. This exhibition looks at the lyrical ways in which art can serve as a vehicle of denunciation as well as an agent of change.

This is an excerpt of Marcela Guerrero’s essay “Maria’s Wake: Puerto Rican Art, 2017–2022.” Read the full essay in the exhibition catalogue no existe un mundo poshuracán: Puerto Rican Art in the Wake of Hurricane Maria. 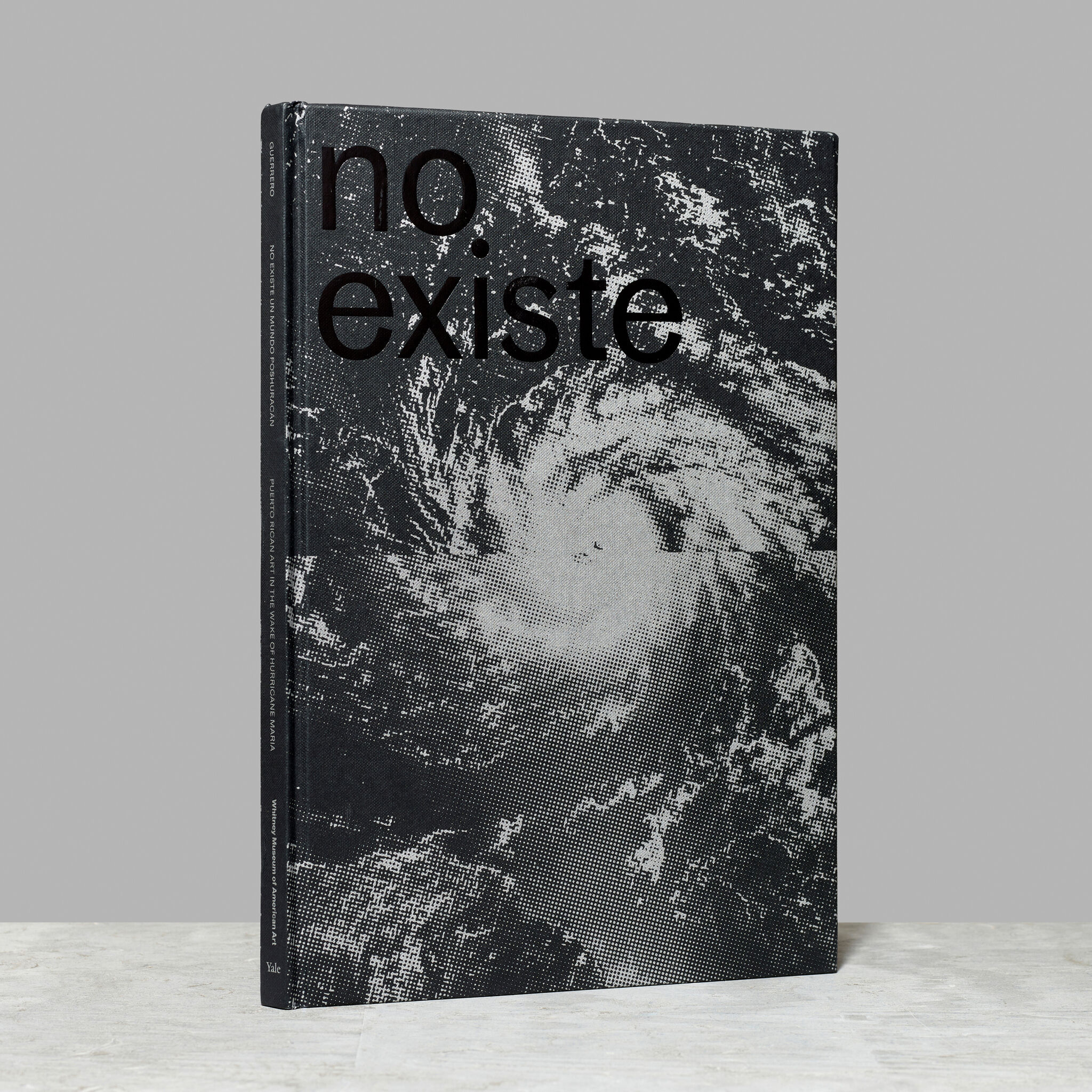 This is an excerpt of Marcela Guerrero’s essay “Maria's Wake: Puerto Rican Art, 2017–2022,” republished from the exhibition catalogue no existe un mundo poshuracán: Puerto Rican Art in the Wake of Hurricane Maria.